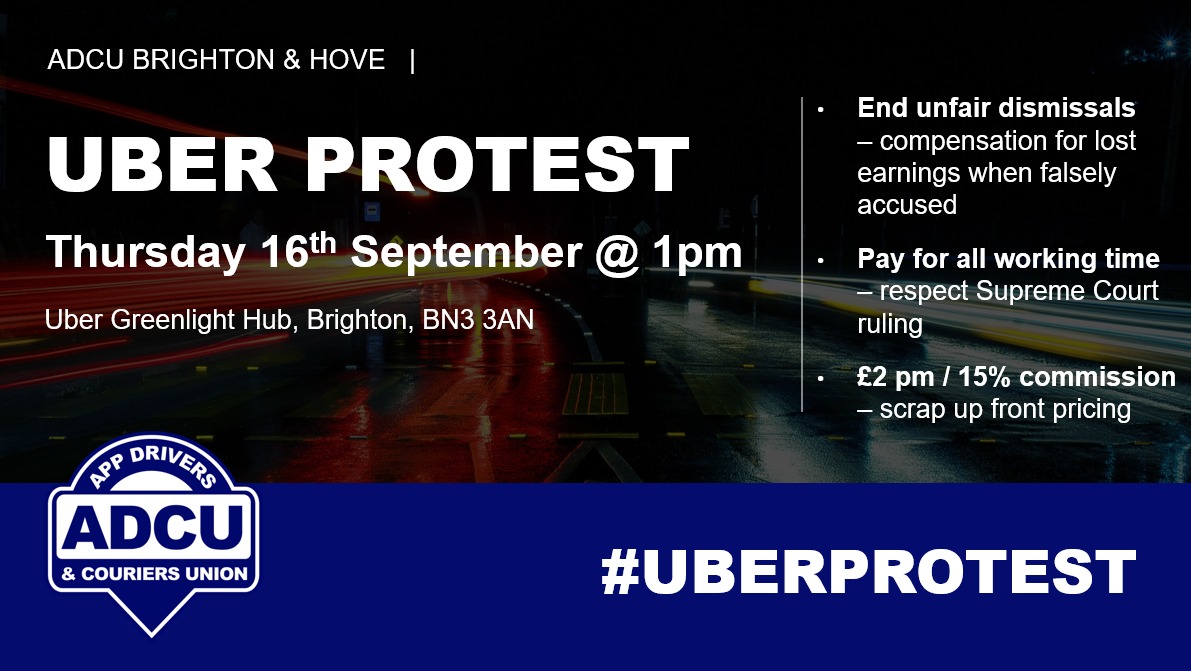 The union is also highlighting the shocking treatment of local Uber driver and ADCU member Islam Rushdi who was falsely accused of sexual assault by an Uber  passenger on July 30th. Uber reported the matter to the Brighton & Hove Council hackney carriage office who examined the CCTV recording of the trip and cleared Mr. Rushdi on August 2nd. The council wrote to Uber then stating:

I can confirm to you that this is a false allegation by the customer. I can confirm that the allegation is false and probably just made to get a refund of the fare paid.  Please can you reactivate Mr Rushdi on the Uber platform ASAP and remove the permanent record of the complaint from his driver record.

However, Uber did not reinstate Mr. Rushdi until August 27th leaving him and his family not only traumatised by the false allegations but also without an income. Mr. Rushdi and his family were caused great emotional and financial distress as they struggled to keep up with fixed lease and insurance costs of the vehicle and support their growing family. During this time, Mr. Rushdi and his wife welcomed a new child to their family amidst the deep distress caused by Uber.

The union is now demanding that Uber compensate Mr. Rushdi for lost earnings for the period and apologise for the length of time he was suspended.

Uber's treatment of Islam Rushdi and many other ADCU Brighton members over the years has been brutal and is unacceptable in the modern day. Drivers work long hours on low pay and are systematically denied basic rights by Uber such the right to earn the minimum wage and protection from unfair dismissal. Uber are privileged to be allowed to operate in Brighton but in return Brighton & Hove City Council must protect licensed private hire drivers from exploitation and demand that Uber obey the law starting with full implementation of the Supreme Court ruling.

2. `ADCU is the largest trade union in the UK for private hire drivers and couriers. The union represented the lead claimants in Aslam v Uber at the Supreme Court earlier this year.

3.  Uber has not obeyed the Supreme Court ruling that drivers be paid for all working time from log on to log off. Instead Uber is cherry picking their interpretation of the ruling to only observe worker rights of drivers from time of dispatch to drop off. This means that waiting time remains unpaid which makes up around 40% of working time.