In the wake of the shocking Uber Files revelations, the ADCU is staging a 24-hour strike on July 20. Uber’s common defence for both their UK worker rights failures and the global Uber Files scandal is to say that the company fundamentally changed in 2017 after Dara Khosrowshahi became CEO. 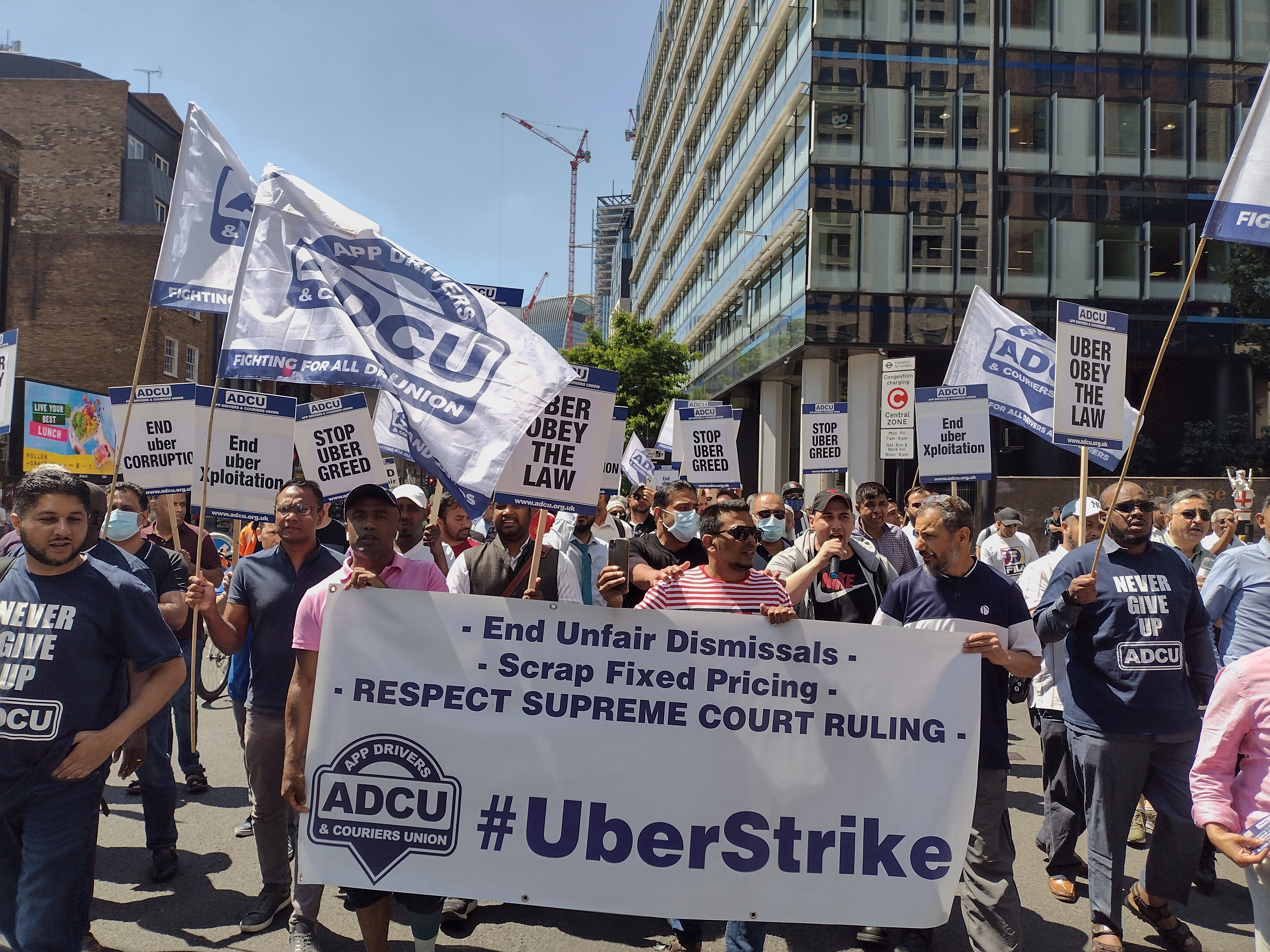 In the wake of the shocking UberFiles revelations, the ADCU is staging a 24-hour strike on July 20. Uber’s common defence for both their UK worker rights failures and the global Uber Files scandal is to say that the company fundamentally changed in 2017 after Dara Khosrowshahi became CEO.

This is a lie. Uber certainly has become more slick and less brash in its PR, but the brutal exploitation of workers and political graft has only intensified.

The ADCU are striking and staging a public protest to demand that Uber immediately:

·       obey the Supreme Court ruling on worker rights in full

·       end unethical political influencing in the UK, respect our democracy and the integrity of our regulatory bodies

·       dismiss Uber Executive Board member Pierre-Dimitri Gore-Coty, a convicted criminal in France, whose conduct which endangered drivers & passengers was exposed in the Uber Files

The union is requesting that passengers do not cross the Uber driver picket line and do not use the service on Wednesday.  The ADCU invites the public to join the demonstration at Uber UK head office at Aldgate Towers, London E1 8FA between 12-2pm on Wednesday.

Uber has failed to comply with the Supreme Court and lower court rulings to pay drivers at least the minimum wage after costs for all working time from log on to log off.  Instead, Uber has chosen to observe worker status for the working time periods only from dispatch to drop off but excludes waiting time which leaves drivers short-changed for about 40% of their true working time. In addition, last year Uber arbitrarily set the HMRC reimbursement rate of 45p for the purposes of calculating driver costs in determining minimum wage payments.  However, this rate is not appropriate for commercial vehicle and was anyway set in 2011 and certainly does not reflect 36% fuel inflation since last yearThe union is demanding full compliance with the courts, fares to be increased to £2.50 per mile and 20p per minute and that Uber commission be capped at 15%.

In the wake of the Supreme Court ruling and in the midst of the pandemic when driver incomes had been decimated, Uber took unfair advantage of many drivers to reach a voluntary financial settlement for back pay and holiday pay owed with the signing of COT3 agreements. However, other drivers who have since settled through large solicitor firms handling group actions have been receiving settlements that we estimate are as much as 66% more even after legal fees have been deducted. The ADCU is demanding Uber simply pay all drivers all that they are owed without exception or excuse. In addition, Uber should bear all legal costs.

Uber Files have revealed how Uber has had undue political influence abroad, but the same problem continues in the UK with rampant political lobbying and influencing.  Given the government’s failure to actively enforce employment law against Uber or to bring forward long promised employment legislation, the ADCU is greatly concerned that Uber’s access to power and intense lobbying has been a decisive factor in favour of Uber and against Uber drivers.

The ADCU is concerned about Uber’s recent targeting of the Labour party with Uber executives recently meeting with Rachel Reeves MP, Yvette Cooper MP and other MPs. Uber executives participated at Labour Party conference events last year. Recently Uber hired Princess Bright, a Labour Party Councillor in the London Borough of Barking and Dagenham. Given Uber’s public license status in London, Councillor Bright’s appointment is a clear conflict of interest for the borough and for Uber.

The ADCU is demanding that Uber end all corrupt political influencing and that elected and local politicians commit to zero influence contact with Uber until the company demonstrates full compliance with employment, transport and taxation laws.

The ADCU is demanding the immediate sacking of Uber's SVP for delivery and executive board member Pierre-Dimitri Gore-Coty in the wake of the Uber Files revelations because he presents a threat to the safety of millions of workers. Uber cannot claim the company has changed while Gore-Coty remains as a member of Uber’s leadership team.

Gore-Coty is reported to have maintained a "playbook to fight enforcement" and deployed a monitoring tool called 'Heaven' to identify and cancel bookings made by regulatory inspectors acting incognito. Regulatory standards and enforcement are essential to the safety of workers and customers. Gore-Coty is a convicted criminal in France.

Uber is in breach of a 2018 license condition set by Chief Magistrate of the Westminster Magistrate Court that Uber must not employ any senior staff who were involved in such activity designed to thwart regulatory oversight in the UK or in any other jurisdiction. However, rather than sack Gore-Coty, Dara Khosrowshahi promoted him to the executive board. Indeed, Mr. Gore-Coty could not pass the enhanced criminal records check required for all minicab drivers who seek to be licensed in London.

“Uber’s intense political influencing continues apace while the government yet again delays long promised employment legislation to curb excesses of the gig economy. Uber has even gone a brazen step further beyond run of the mill lobbying to even hire elected officials to senior management roles in the company. Because nothing has changed, we have no choice but to strike and take to the streets. We ask the public to support us, not just for our sake, but to stand against the corrosive effect Uber has on our democracy, the rule of law and the integrity of our regulatory bodies.”

“Uber is desperate to whitewash away the Uber Files revelations as sins of the distant past, but management behaviour is as egregious now as ever it was. Uber continues to defy the Supreme Court ruling to deny drivers their full rights to minimum wage and holiday pay for all working time. In making partial settlement in the wake of the landmark ruling, Uber took advantage of vulnerable drivers, already impoverished by the pandemic, to pressure them to settle for far less than what was really owed and to surrender their statutory rights.”

Protest at 12pm at Uber HQ,