Uber Drivers Who Defeated Ride-Hailing App Want Their Data Back 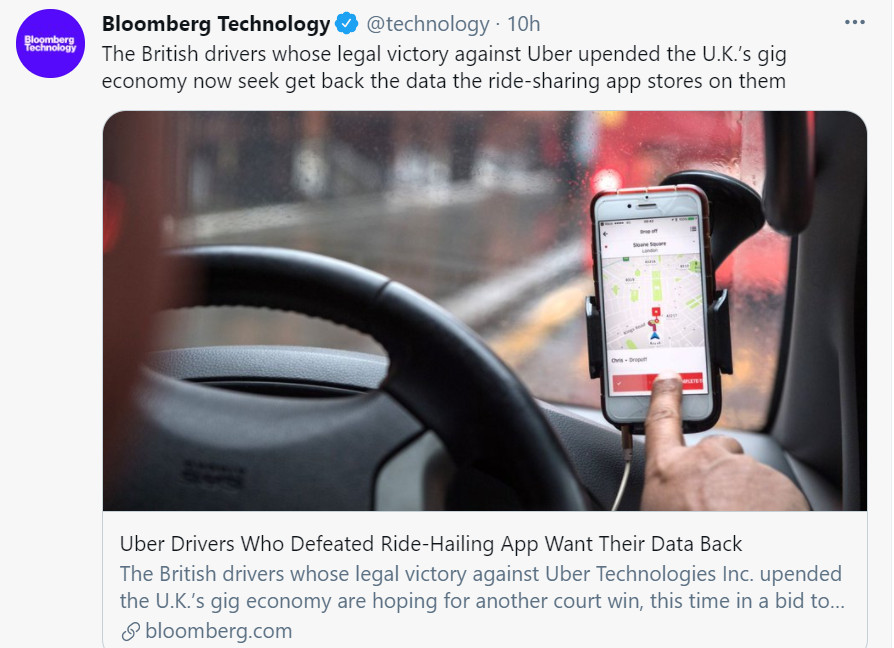 The British drivers whose legal victory against Uber Technologies Inc. upended the U.K.’s gig economy are hoping for another court win, this time in a bid to get back the data the ride-sharing app stores on them.

Former Uber drivers James Farrar and Yaseen Aslam are waiting for the Amsterdam District Court to decide as soon as this week on whether the ride-hailing giant broke Europe’s strict privacy regulations by withholding information it holds on drivers and couriers. Amsterdam is home to Uber’s international headquarters.

“There’s a surveillance arms race in the gig economy,” Farrar said. “If you move everything behind the digital curtain Uber can say, ‘You’re your own boss. Hands off. We’re not touching anything.’ But below the desk, we’re being managed. So we have to get this transparency.”

The App Drivers & Couriers Union want Uber to give drivers access to data such as their ratings, information about trips they’ve made, their performance compared to other drivers, and notes that Uber employees make on their internal profiles, according to a court filing from the claimants’ lawyer Anton Ekker. While Uber offers drivers access to some personal data, the scope is limited and often incomplete, he said.

Farrar said that Uber’s technology was also used to suspend some of its drivers, who weren’t satisfied with the company’s explanation on why they were blocked from the app. The claimants are seeking compensation from Uber, as well as a 10,000 euro ($11,900) penalty for each day the firm fails to reinstate the accounts of the affected drivers, if the court rules in their favor.

“Uber takes the decision to suspend or end a partnership with any earner on our platform very seriously,” a spokesman for Uber said. “Drivers, and anyone else using our app, can request access to the data that we can legally provide. We will give explanations when we cannot provide certain data, such as when it doesn’t exist or disclosing it would infringe on the rights of another person under GDPR. As part of our regular processes, the drivers in this case were only deactivated after manual reviews by our specialist team.”

A spokesman also referred to a blog post that the company published in December about the company’s policies that said that algorithms ensure the safety of everyone using the app and that their technology is implemented in line with European regulations.

For Farrar and Aslam, who founded the ADCU to represent gig economy workers in the U.K., the GDPR case is the latest front in a battle with Uber that started more than five years ago when they began to lobby for drivers’ rights and benefits.

The two sued Uber in 2015 over how it treats its drivers in a case that went to the U.K.’s Supreme Court. On Feb. 19, after 5 years, they won a precedent-setting decision that’s unlocked thousands of similar claims against the Silicon Valley ride-hailing giant and will change the way the gig economy operates in the country. The drivers must be treated as “workers,” a legal term that’s not the same as being a full employee, but gives them rights to vacation pay, rest breaks and minimum wage while they’re using the app.

Farrar said he started to look into Uber’s obligations to its drivers after a passenger attacked him one night in March 2015 and he said Uber took 10 weeks to give the person’s information to the police.

Aslam was one of Uber’s first drivers in the U.K. when it came to London in 2012, turning to the app to make money after losing a job in IT. He initially liked the startup atmosphere and would occasionally join the handful of local Uber managers for a cup of tea. But as it grew, he said drivers were verbally and physically abused, and the company wasn’t responsive to complaints. When a passenger made a racist comment and Aslam asked the person to leave the car, Uber told him there were serious repercussions for kicking out riders.

A representative for Uber declined to comment on either incident.

The App Drivers & Couriers Union is also demanding that operators like Uber and other private car hire services engage in collective bargaining agreements, end what they say are unfair deactivations and dismissals, and take on more of the costs of operating the cars, such as congestion charges. They also want regulators to put rules about minimum wage and vacation pay into law, cap the number of driver’s licenses and add risk management systems to reduce attacks on drivers.

“It hasn’t ended yet” Aslam said. “Uber still wants to fight us and continue with this. They’re spending more money fighting us than working with us.”