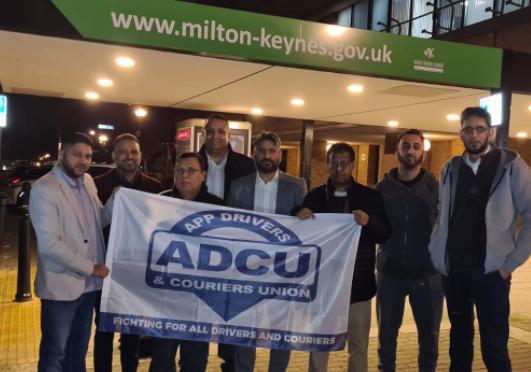 ·        Milton Keynes council has placed passenger safety at risk by turning a blind eye to operators who insist they are not responsible for travel and contracts are between drivers and passengers only, a clear violation of the law

On Tuesday 9th February, the licensing committee of Milton Keynes council placed passenger safety at risk and let bad minicab bosses off the hook by shifting responsibility for the supply and display of vehicle signage from licensed operators like Uber and Skyline to local drivers.

The move comes after the Council admitted in its report that licensed private hire operators had often failed to provide the required signage to identify the operator under the current rules.  The council has failed abysmally to enforce the law against licensed operators and rather than do so they’ve decided to abandon the existing rules altogether and shift the burden to minicab drivers instead. Now minicab drivers will be required to pay for a supply of the new Milton Keynes council branded signs and will be prosecuted if they are not displayed.

Perversely, the new signage policy which purports to protect the travelling public will have exactly the opposite effect. This is because signage like that proposed by the council has been found to be confusing to passengers who are likely to think the vehicle is a hackney carriage vehicle which can be hailed or booked immediately on the street where as private hire vehicles must be booked in advance otherwise the journey is uninsured and illegal. As a result, private hire drivers are more likely to be approached by passengers demanding instant travel or booking. Late at night this can cause danger for the driver who must refuse travel to anyone who attempts to make an instant booking in this way.

The new signage could further cause complacency on the part of the passenger who may now think that they can enter any vehicle with such signage and be safely accepted for travel. In fact, the only certain way the passenger can be sure they are entering a vehicle that has been pre booked is by checking that the vehicle registration of the vehicle matches that which has been provided in the booking. Simply looking for the Milton Keynes branded signage provides no such assurance.

The new signs undermine the clear two-tier distinction between the taxi and private hire markets which operate under different legislation and regulation. Taxis can be hailed for instant hire whereas private hire vehicles must be pre booked in advance. The signage risks blurring the lines between the two in the eyes of the consumer.

The ADCU believes the new rules also weaken potential worker rights claims by removing the requirement to display the operator employer signage in lieu of council signage. The requirement for display of signage, brands and uniforms are often a key test in determining an employment relationship. The Council’s refusal to enforce existing rules on signage while transferring the cost and burden to workers is fundamentally unfair and a betrayal. It seems that the Council is bending over backwards to serve the interests of off-shore profiteers like Uber and Bolt while punishing tax paying residents trying to make a living working in the industry on the heel of a pandemic.

Milton Keynes council has failed in its duty to enforce the law to insist that the contract for travel must be between operators and their passengers only. Instead, international platform operators such as Bolt and others have been allowed by the Council to illegally demand that the contract for service is between the driver and passenger while they deny any potential liability. The Local Government (Miscellaneous Provisions) Act1976 requires Milton Keynes Council to ensure that operators maintain a contract with the passenger for the provision of transport. Section 56 of the act states:

Recently the High Court ruled in our favour and against Uber so that all contracts under the London Act must now be between the passenger and the licensed operator.

Although the case related to the 1998 London Private Hire Vehicles Act the bench did offer some legal analysis of the 1976 Act at paragraph 31 as follows:

Section 56 of the 1976 Act, set out above, supports this view. It provides that every contract for the hire of a licensed private hire vehicle outside London shall be deemed to be made with the operator who accepted the booking for that vehicle whether or not he himself provided the vehicle. That demonstrates a clear parliamentary intention that the operator should undertake contractual responsibility. The language of the 1998 Act is different, but there is no reason for any different parliamentary intention in relation to private hire vehicle services in London.

“The Milton Keynes Council licensing committee has made a grave error with this decision which places passengers and drivers at risk while letting fat cat bosses off the hook. Passengers are more likely to approach private hire vehicles without a proper booking as a result of this intervention when the opposite should be the objective. Once again the council has transferred more risk and cost from off shore operators and placed the burden on local working drivers who often earn less than the national minimum wage. Meanwhile, the council has licensed operators who insist they are not a party to a contract for travel they insist only exists between the driver and passenger. This arrangement is a clear violation of the laws the council has a duty to enforce and represents an unacceptable risk to passengers. I sincerely hope the council over rules the licensing committee when this matter comes before them in due course.”