Labour, other opposition parties and trade unions must resist government attack on the right to protest

Labour, other opposition parties and trade unions must resist government attack on the right to protest 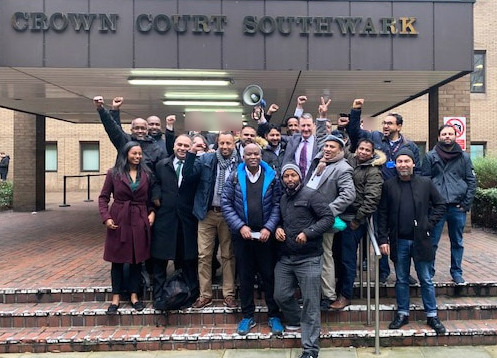 The disturbing scenes of police brutality against women at the vigil for Sarah Everard are shocking but hardly surprising. The police were given wider powers to curb public gatherings during the pandemic, but they also have discretion in how to use those powers. Last night, the Met failed miserably to exercise good judgment and as a result they put the public at greater risk rather than the opposite.

One year ago, I faced a criminal trial at Southwark Crown Court accused of assault by beating of two police officers at an official trade union demonstration of private hire drivers against Transport for London at Parliament Square. Two police officers stood in front of me while I was using a megaphone and weeks later, I was blindsided by a summons for police interview over an alleged assault by sound. The charges came only after I made a series of three police complaints including one about police behaviour at the demonstration in question which I later sought to escalate.

Private hire drivers are 94% BAME according to TfL licensing stats and the demo was unfairly profiled by the police as a ‘terrorist risk’. The police demanded that drivers stay in their vehicles and allow police access to inspect the boot of every vehicle. We felt this was disproportionate and it was not a measure previously demanded of black cab drivers who are 85% white British. During the unreasonably restricted demo the police became violent with protesters in a manner similar to the scenes witnessed last night on Clapham Common.

As my criminal case rumbled on over months, I was disturbed to learn in the discovery process how casually the Met had exchanged intelligence about me with Transport for London staff. This included exchanging details about a meeting I had with then Transport Commissioner Mike Brown as we tried to find a way to end the dispute and discussions about the content of my Facebook posts. I was even more alarmed to learn the police unsuccessfully pressured the CPS at the time to go forward with an ‘incite to riot charge’ which could have meant serious custody time if convicted.

In the end, the case was thrown out after three days of trial with the Judge remarking that it was ‘unfortunate’ the case had ever come to court at all. The Judge ruled that since there was no application of force on my part, no offence had ever taken place. There was no case to answer, the jury was dismissed, and I was acquitted.

The experience of police behaviour on Clapham Common last night and with our protesters in Parliament Square last year does not auger well for the rights of protesters in the future if the Police, Crime, Sentencing and Courts Bill published last week passes through parliament tomorrow. The government wants to impose stringent controls on static demos, make the use of noise an offence, and severely restrict demos at Parliament Square. The police will have greater discretionary powers with greater penalties but have long demonstrated a steady record of abusing the considerable powers they already have.

Separately, last week Her Majesty’s Inspectorate of Constabulary and Fire & Rescue Services (HMICFRS) published its report into the future of protest policing and it doesn’t make for happy reading either. The police now seek to target ‘aggravated activists’ for intelligence gathering by means of covert surveillance.

Taken together, the government bill and the HMICFRS report amounts to a wholesale assault on our civil liberties and potentially deprives trade unionists of their most important weapon – the ability to strike and protest publicly. David Lammy has today at last announced that the opposition will vote against the bill, but the Labour party must do far more to stand up for the future right of protesters threatened by this bill. They must also take a stand against the future protest policing plans outlined in the HMCFRS report. Trade unions too must now step forward and speak out before it is too late.

Experiences like mine and those of countless other protesters swept up in the criminal justice system are deeply traumatic for the individuals involved. They also place incredible pressure and cause mission distraction for their campaigning organisations. Such police actions are individually and collectively demoralising and that is their very point. Women and BME people are also more likely to face adverse police action and less likely to have a fair shake in the criminal justice system.

My previous trade union at the time did not handle the support of my prosecution case well but that is another story for another time. The point is, small independent trade unions and NGO's are often not very competent at or capable of managing what really amounts to a proxy attack on their organisation by police targeting of individual activists. Frankly, small independent unions often lack the resilience, maturity, collective mindset, resources and leadership skills to recognise and manage such an attack for what it is. This is why the TUC and the entire greater trade union movement must speak out now as one against the Police, Crime, Sentencing and Courts Bill and the HMICFRS report.

Together, unions collectively can play an important role in pressuring the government and the Labour opposition to strenuously defend the right to free speech and public protest in this country. They also have a hugely important leadership role to play in maintaining the confidence, resolve and resilience of rank-and-file activists as well as the whole trade union movement for the duration of this period of attack on our civil liberties.

Last month, the ADCU and the GMB won a six-year battle against Uber for worker rights with a resounding Supreme Court ruling in the favour of workers. In the days that have followed, we have seen the government make absolutely no commitment to enforce the ruling. We have seen Uber defy and disrespect the court by claiming the ruling only applies to a few claimants in the case rather than the entire workforce. So, what other avenues of influence remain for workers who have been denied protection they are entitled to under the law but to strike and protest? If the government has its way, we will no longer be able to do even that.