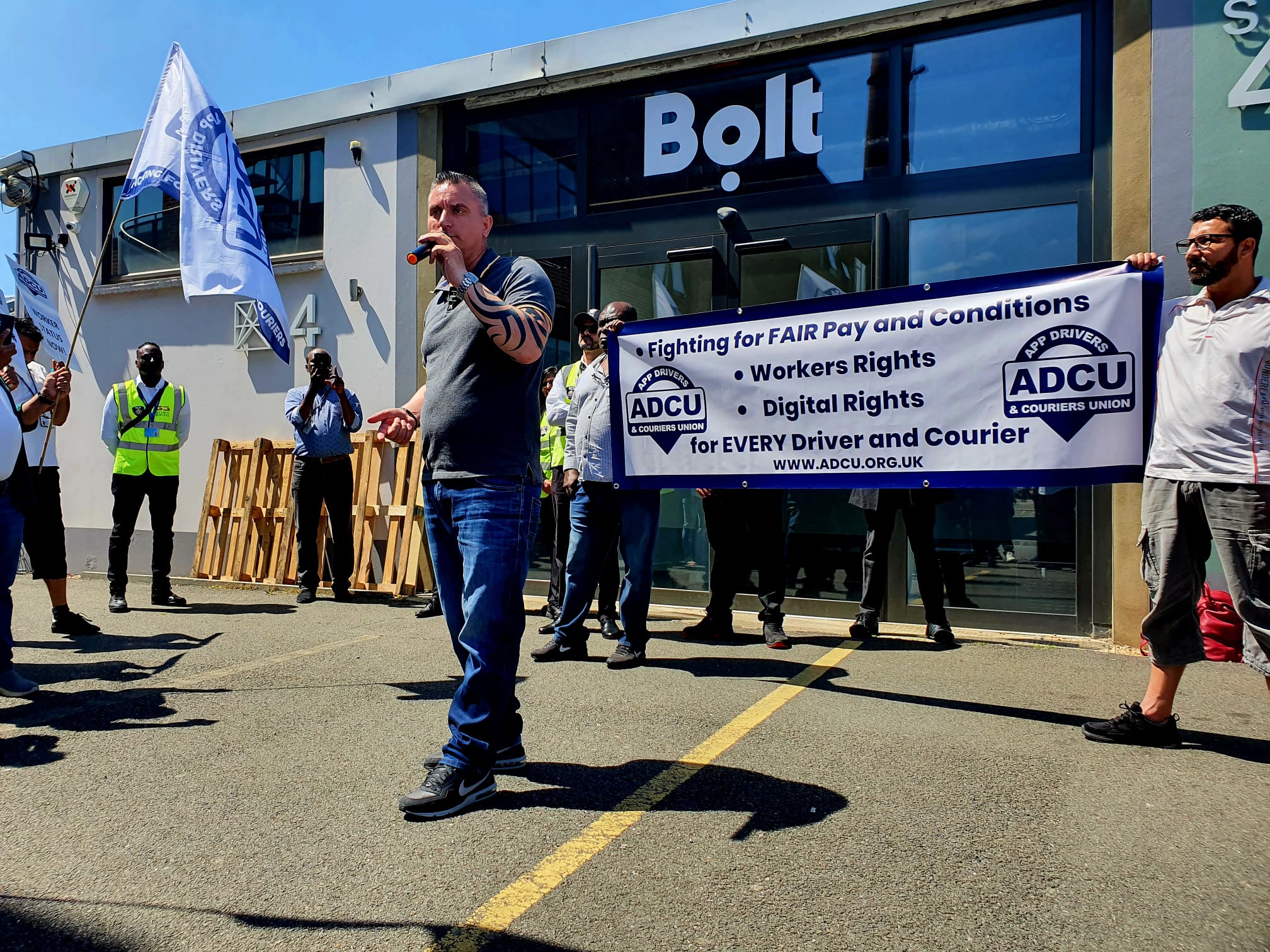 ·         ADCU estimates that up to 1/3 of Bolt’s current £6.2 billion market valuation is attributable to wage theft and tax avoidance in the UK alone

·         Drivers have been provided no increase in the last year pay despite fuel inflation of 34% and consumer price inflation of 7.8%. Over the same period, Bolt’s market value has appreciated by £2.8 billion or nearly £8 million per day.

The App Drivers & Couriers Union (ADCU) are staging a 24-hour work stoppage and demo against Bolt, the minicab operator app, over the company’s failure to respect basic worker rights including the right to minimum wage, holiday pay and protection from unfair dismissal. Strike action began at midnight and will continue until 11:59pm tonight.

The drivers complain they now face a cost of living crisis because in the past year they have had to soak up additional operating costs associated with fuel inflation of 34% and vehicle cost inflation of 28% without any adjustment in fares or pay. What little there is left to take home is worth 7.8% less than last year due to general inflation. In recent years, Bolt increased their commission on fares from 15% to 20% without any consultation or agreement with drivers.

The drivers are also striking over Bolt’s practice of unfair summary dismissals without right of appeal and the company’s refusal to cooperate with driver requests for access to personal data and algorithmic transparency.

The drivers are specifically demanding:

·         Bolt to comply with the Supreme Court ruling on worker rights in the Uber case because it is applicable to Bolt also.

While drivers have suffered plummeting pay in the last year due to hyper-inflation of operating costs and a slow recovery from the pandemic, Bolt’s company valuation ballooned by £2.9 billion to £6.2 billion. That is an increase in value over the period by almost £8 million per day making Bolt’s valuation higher than FTSE100 stalwarts like Sainsburys, Kingfisher, Royal Mail, Burberry and Whitbread.

The ADCU estimates that Bolt owes drivers £0.5 billion in unpaid back pay for minimum wage and holiday pay. In addition, the union estimates Bolt owes HMRC around £1.5 billion in VAT unpaid as a result of misclassifying drivers as self employed non workers. This suggests  that around 1/3 of Bolt’s current market value is attributable to wage theft and tax avoidance in the UK alone.

In 2021 the ADCU initiated a worker rights claim against Bolt at the Central London Employment Tribunal and since then almost 800 ADCU members have joined the claim.  The union is represented by Dallas MacMillan solicitors.

Bolt’s investors have become fabulously wealthy on the back of worker abuse and tax avoidance. Despite their reliance on a public license to operate in the UK, Bolt has unashamedly become the unacceptable face of capitalism with behaviour almost worse even than Uber's. Bolt has hung the workforce out to dry by leaving them exposed to fuel and other operating cost inflation but without any pay increase or supplement. Drivers have now reached breaking point which is why they have gone on strike and are asking the travelling public to support their demand for fair pay and fair treatment.

1.       The ADCU is the largest trade union in the UK for private hire drivers.

2.       In February 2021, the Supreme Court ruled in favour of worker status rights for Uber drivers and the ruling has obvious applicability for Bolt also, but the company has refused to comply. https://www.supremecourt.uk/cases/docs/uksc-2019-0029-judgment.pdf

3.       Bolt’s current valuation has risen by £2.8 billion to £6.2 billion in the last year. That is valuation growth of almost £8 million per day. 'Super app' Bolt is now worth more than £6bn - and its founder says it's going faster than the competition | Business News | Sky News

7.       Section 3.3 of HMRC tax notice suggests that the principal is liable for VAT in the taxi and private hire industry.  The Supreme Court and the High Court have confirmed that drivers are not the principal but operators like Uber and Bolt are. https://www.gov.uk/guidance/how-vat-applies-to-taxis-and-private-hire-cars-notice-70025