Heathrow Airport thinks it can get away when it thinks nobody is looking. Airport bosses response to concerns has been degrading and racist. 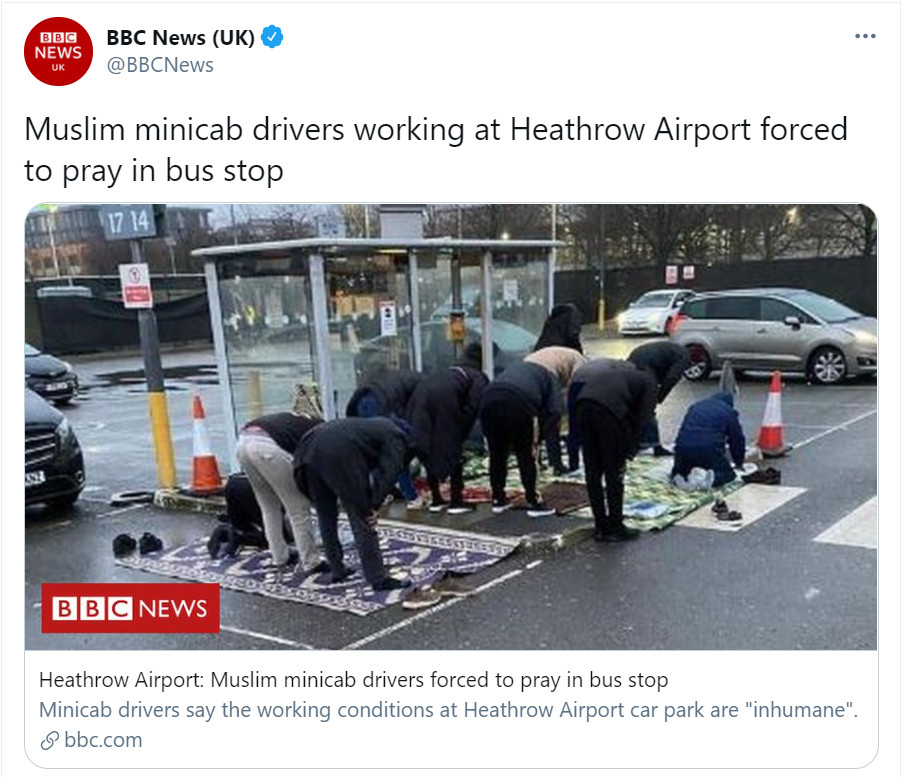 Muslim minicab drivers working at Heathrow Airport have described feeling "humiliated" after being forced to pray in a bus stop car park.

Drivers said they have prayed on the kerb of the road due to a lack of facilities for more than a year, but conditions have worsened recently.

The App Drivers and Couriers Union (ADCU) said workers were put in danger by the airport's services.

It added it would reopen prayer rooms in the terminal when it was "safe to do so".

There are two car parks outside Heathrow Airport, one is designated for black cab taxi drivers, while the other on North Perimeter Road is for minicab and private hire drivers.

The ADCU said there was an increase in drivers waiting in the minicab car park area due to fewer passengers travelling during the pandemic.

Private hire driver Zamir Dreni, who uses the bus stop to pray, said the facilities are "inhumane and degrading".

"Recently, conditions have deteriorated to the point that I believe they are dangerous," he said.

"I feel that the airport authorities treat us with complete contempt.

"We have tried to talking them, we even prepared a petition, but they have refused to listen to us or to take responsibility for the problems here," the 40-year-old said.

Mr Dreni added he pays about £20 per day to the airport in parking charges.

The ADCU said drivers also reported no hot water and soap in the toilet facilities in recent weeks.

"People are praying in close proximity to moving traffic, it becomes a real risk for them.

"If you are a devout Muslim, you must pray and too often it is inside that car park. What can we do?

The union added it was calling for "safe, sanitary and dignified working conditions".

A Heathrow Airport spokeswoman said it was not able to provide facilities in the car park due to "health and safety concerns".

"The airport's cleaning contractors regularly inspect and clean the facilities during peak periods, but we also expect the drivers using the site to keep the facilities in good condition," they said.