The ADCU has called for a 24 hour STRIKE against Uber on Sep 28th starting at a minute past midnight until Midnight.

We will be staging demos up and down the UK in multiple cities at 1PM.

Keep up to date with developments about the strike and the protests on this page, which will be updated whenever new news becomes available. Bookmark the page and share it on your social media channels. 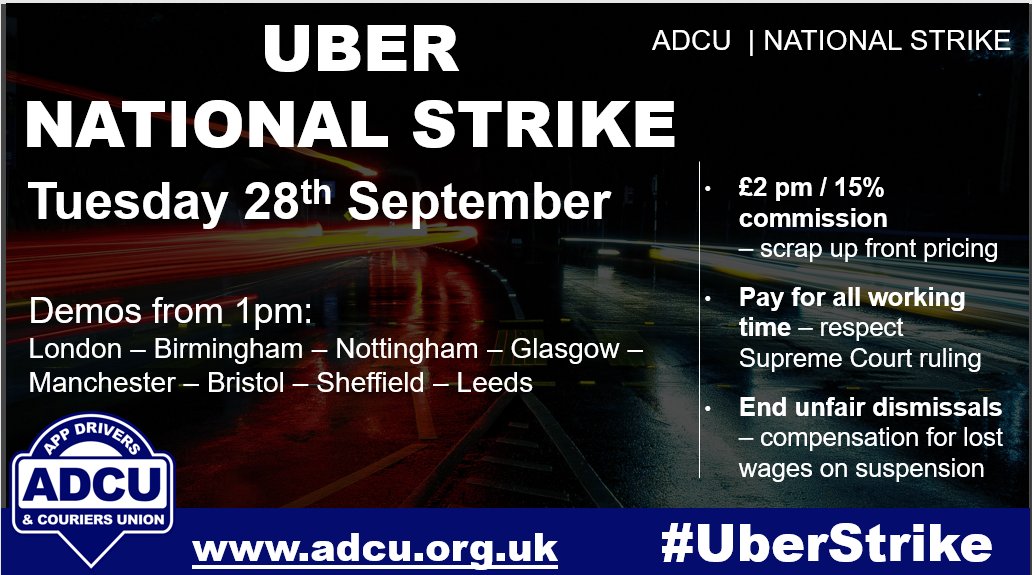 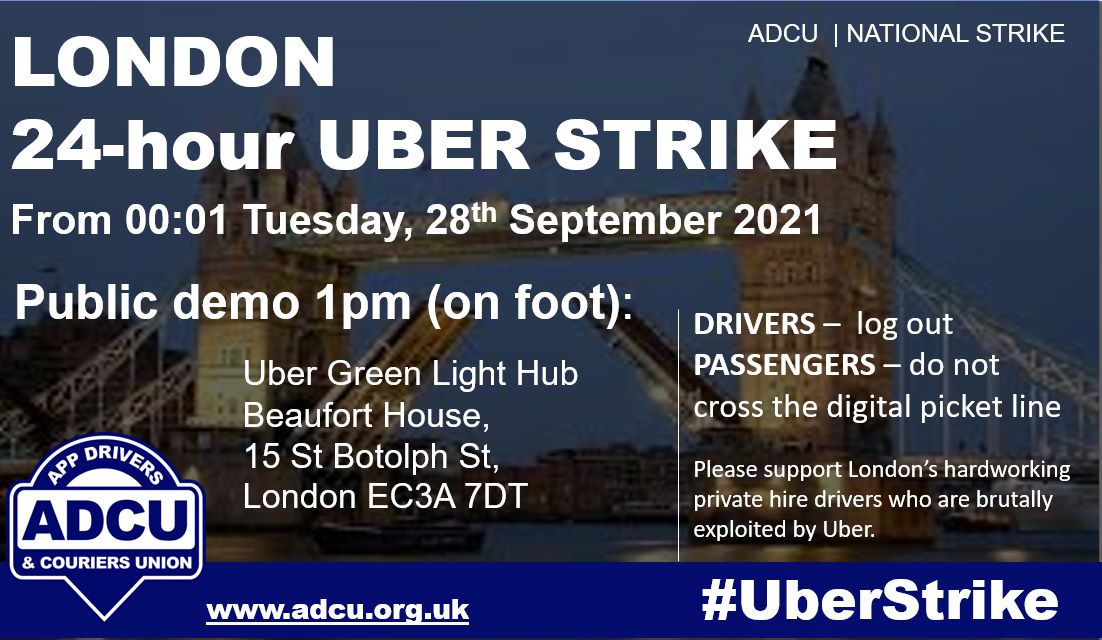 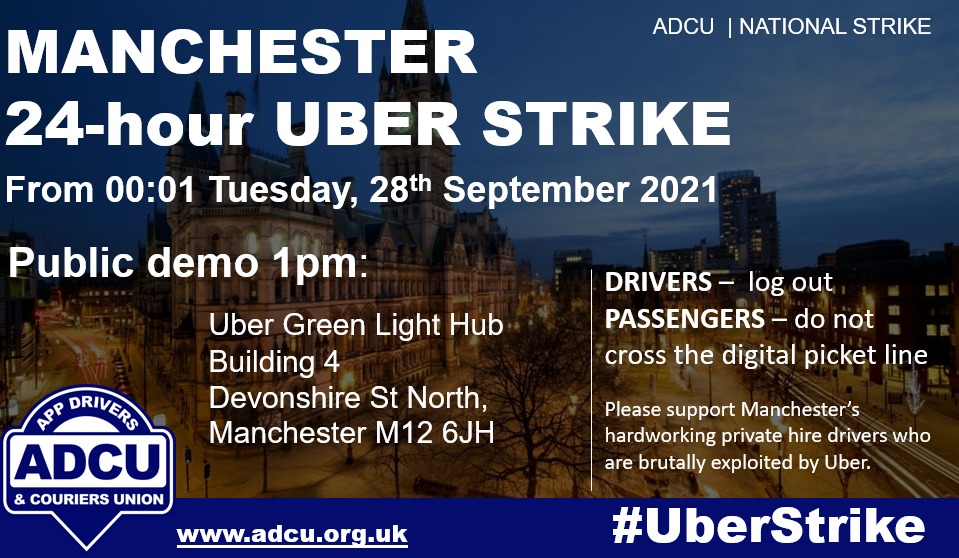 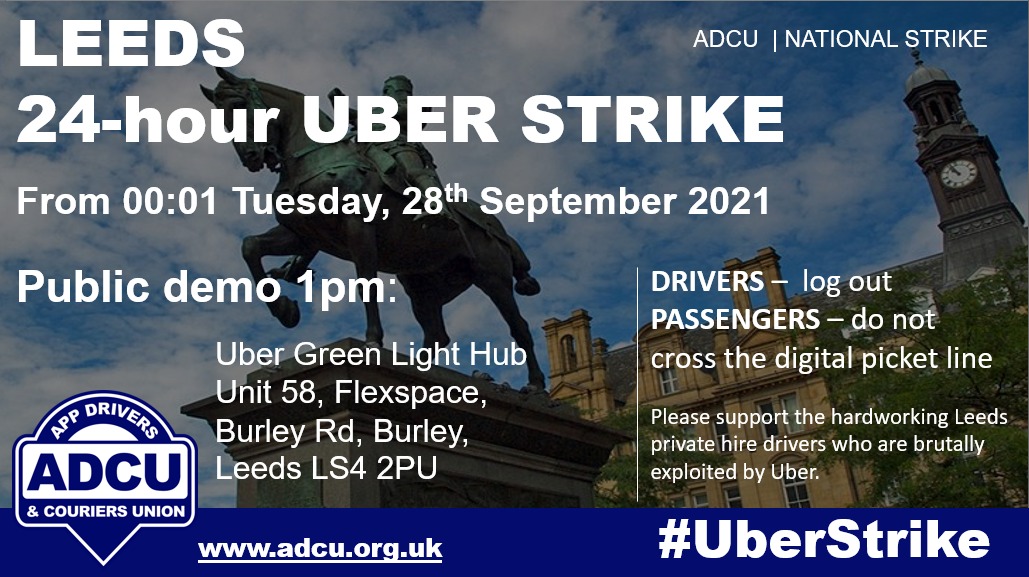 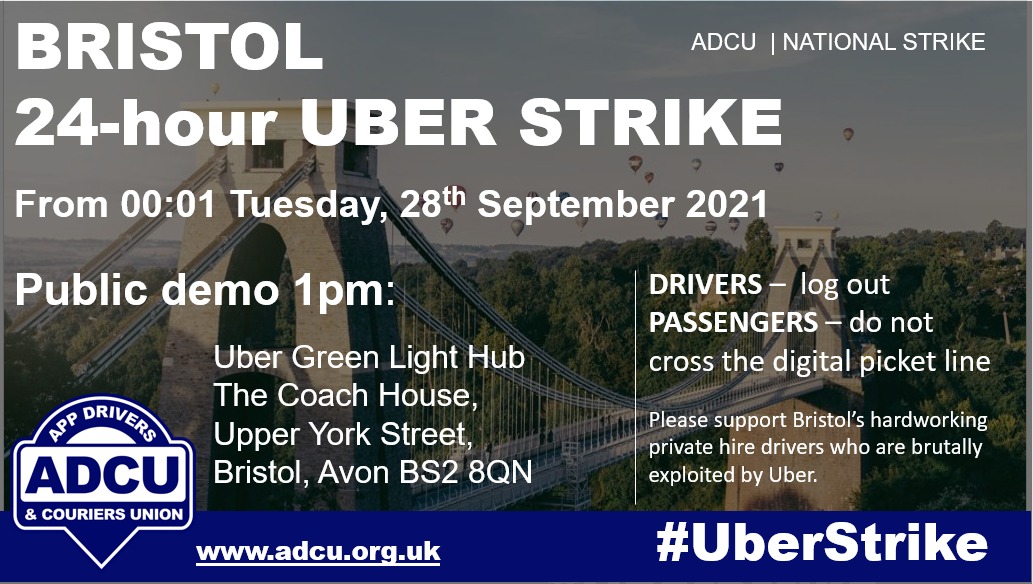 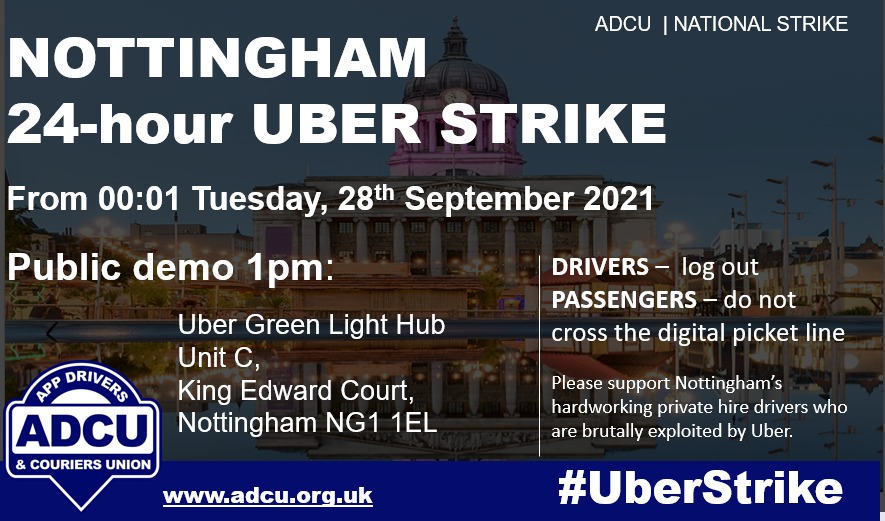 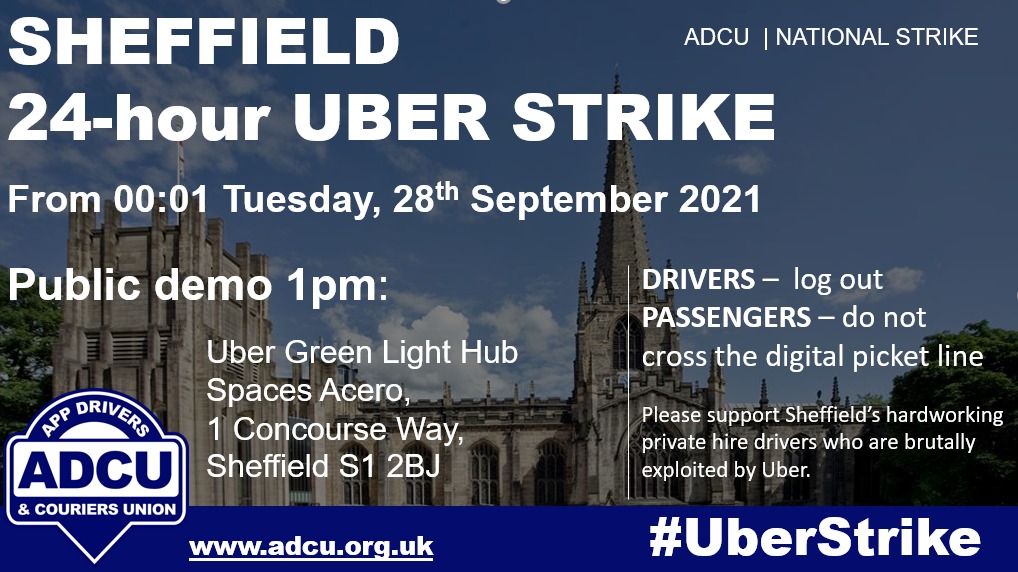 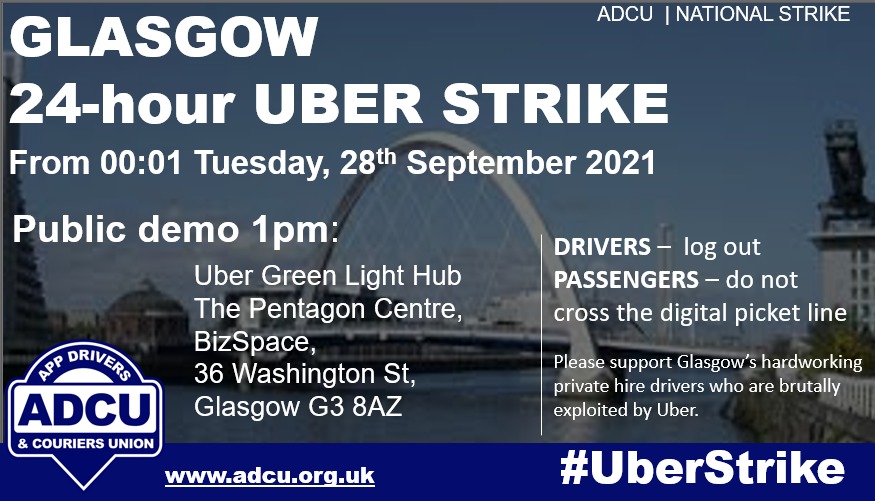 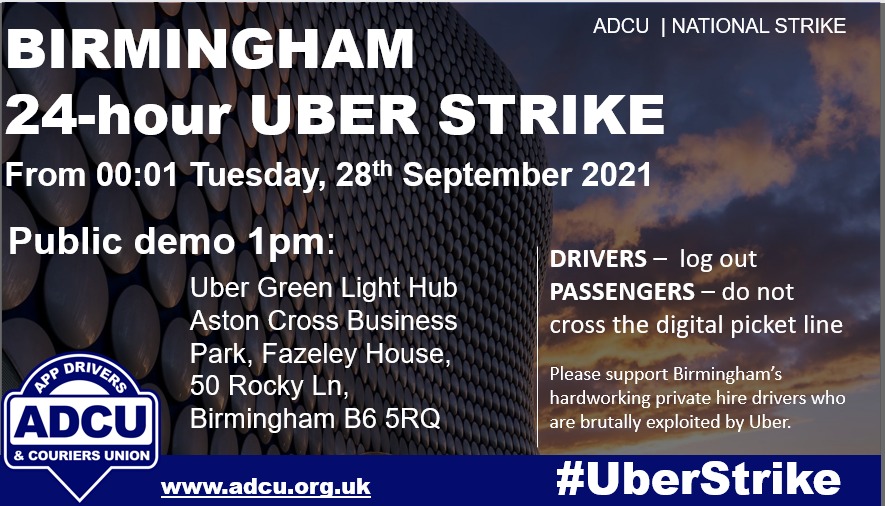 24/09/2021, 6pm: Digital AdVans hit the streets of London spreading the message that Uber Drivers are striking on Sep 28 and urging customers not to use the Uber service. 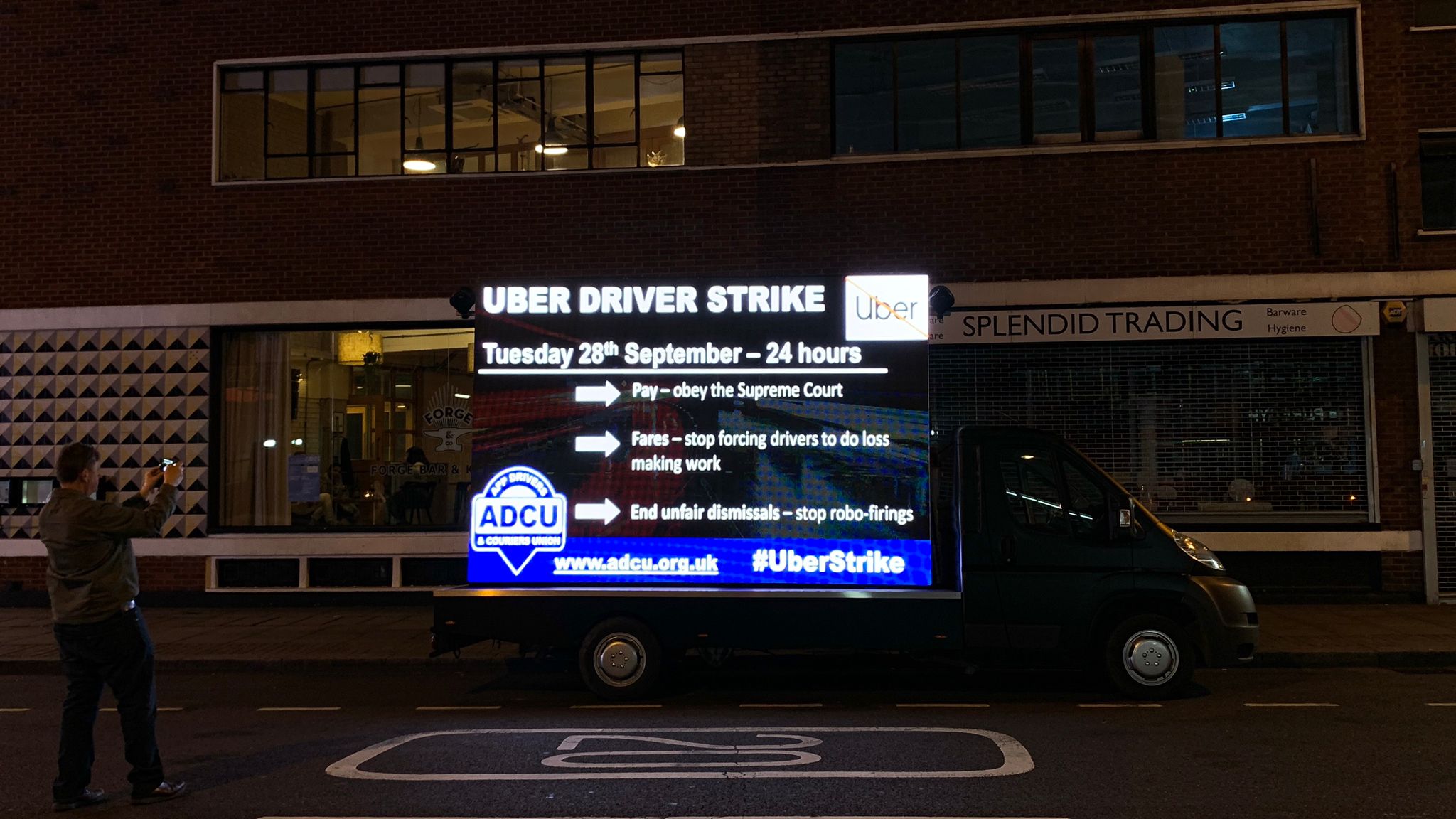 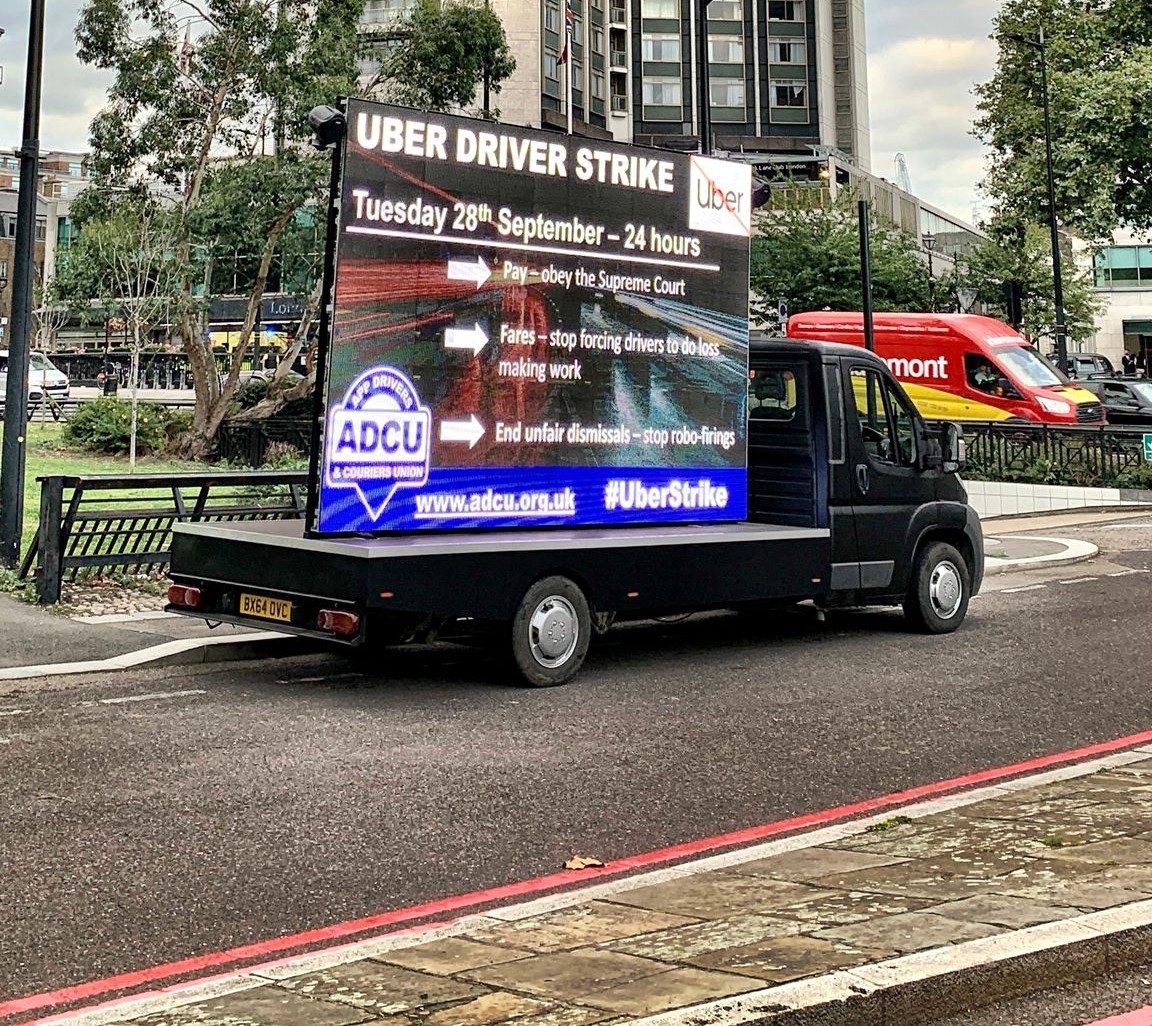 24/09/2021, 1am: ADCU issue a national press release on the calling the national strike and demos in 8 cities. Read the release here.

23/09/2021, 3pm: ADCU Glasgow Chair adds voice to the calls for Uber drivers to switch off their app on September 28th and asks passengers to respect the digital picket line - "We are on Strike".

21/09/2021, 3PM: A Solidarity message was sent out from The Rideshare Professor asking all drivers globally to join the ADCU strike and demos against Uber. Uber drivers in Bangladesh, France and Canada have confirmed they are also striking on 28th September. The strike goes global.

"On September 28, 2021, the ADCU will stage a 24-hour national strike against Uber over poor pay and conditions, unfair dismissals, and failure to implement the UK Supreme Court ruling.

Please Support the strike by not booking the service and by making alternative travel arrangements on September 28th.

Thank you for your cooperation and we apologise for any inconvenience caused. Please share this message."

16/09/2021, 10pm: BREAKING - Tonight the ADCU National Executive Committee voted to stage a national 24 hour strike against Uber on September 28th from 00:01. Drivers - do not log on during 24 hours of September 28th. Passengers - do not cross the digital picket line & do not book the service on September 28th.  #UberStrike. London, Birmingham, Glasgow and Nottingham announce they will stage demos at 1pm on the 28th September.